IN THE UNITED STATES COURT OF APPEALS FOR THE NINTH CIRCUIT

1. Amici are leading technology companies and leading businesses from other sectors of the U.S. economy. These companies’ operations are affected by the Executive Order issued on January 27, 2017, entitled “Protecting the Nation from Foreign Terrorist Entry into the United States” (the “Order”).

2. The Order represents a significant departure from the principles of fairness and predictability that have governed the immigration system of the United States for more than fifty years—and the Order inflicts significant harm on American business, innovation, and growth as a result. The Order makes it more difficult and expensive for U.S. companies to recruit, hire, and retain some of the world’s best employees. It disrupts ongoing business operations. And it threatens companies’ ability to attract talent, business, and investment to the United States.

America proudly describes itself as “a nation of immigrants.”  A quarter of us have at least one parent who was born outside the country. Close to half of us have a grandparent born somewhere else. Nearly all of us trace our lineage to another country.

The “contributions of immigrants,” then-Senator John F. Kennedy explained, “can be seen in every aspect of our national life. We see it in religion, in politics, in business, in the arts, in education, even in athletics and in entertainment. There is “no part of our nation,” he recognized, “that has not been touched by our immigrant background.”

Immigrants make many of the Nation’s greatest discoveries, and create some of the country’s most innovative and iconic companies. Immigrants are among our leading entrepreneurs, politicians, artists, and philanthropists. The experience and energy of people who come to our country to seek a better life for themselves and their children—to pursue the “American Dream”—are woven throughout the social, political, and economic fabric of the Nation.

For decades, stable U.S. immigration policy has embodied the principles that we are a people descended from immigrants, that we welcome new immigrants, and that we provide a home for refugees seeking protection. At the same time, America has long recognized the importance of protecting ourselves against those who would do us harm. But it has done so while maintaining our fundamental commitment to welcoming immigrants—through increased background checks and other controls on people seeking to enter our country.

Potential expansion of entry bar: the Order indicates that this entry bar could be lengthened, and may be expanded to include individuals from any country that is determined, based on unspecified criteria, not to provide sufficient information to the United States.

Waivers based on unconstrained discretion: the Order permits the Secretaries of State and Homeland Security to exercise discretion in issuing visas to nationals from the seven affected countries “on a case-by-case basis.”

The Order effects a sudden shift in the rules governing entry into the United States, and is inflicting substantial harm on U.S. companies. The Order violates the immigration laws and the Constitution. In 1965, Congress prohibited discrimination on the basis of national origin precisely so that the Nation could not shut its doors to immigrants based on where they come from. Moreover, any discretion under the immigration laws must be exercised reasonably, and subject to meaningful constraints.

American Innovation And Economic Growth Are Intimately Tied To Immigration. The tremendous impact of immigrants on America—and on American business—is not happenstance. People who choose to leave everything that is familiar and journey to an unknown land to make a new life necessarily are endowed with drive, creativity, determination—and just plain guts. The energy they bring to America is a key reason why the American economy has been the greatest engine of prosperity and innovation in history.

Immigrants are leading entrepreneurs. “The American economy stands apart because, more than any other place on earth, talented people from around the globe want to come here to start their businesses.” Some of these businesses are large. Immigrants or their children founded more than 200 of the companies on the Fortune 500 list, including Apple, Kraft, Ford, General Electric, AT&T, Google, McDonald’s, Boeing, and Disney. Collectively, these companies generate annual revenue of $4.2 trillion, and employ millions of Americans.

These are “the shops and services that are the backbone of neighborhoods around the country.” Between 2006 and 2010, immigrants opened 28% of all new businesses in the United States.

Immigrant-entrepreneurs come from all parts of the world. In 2014, “19.1 percent of immigrants from the Middle East and North Africa were entrepreneurs.”

Immigrants also fuel the growth of the economy as a whole. “When immigrants enter the labor force, they increase the productive capacity of the economy and raise GDP. Their incomes rise, but so do those of natives.”

Immigrants do not take jobs away from U.S. citizens—they create them. Thus, immigration “expand[s] the American work-force, and encourage[s] more business start-ups”—ensuring that “[b]usinesses ranging from Apple Corporation to apple growers would be able to find the workers they need in America.”

Since 2000, more than one-third of all American Nobel prize winners in Chemistry, Medicine, and Physics have been immigrants.

The world rejects your fear, hate-mongering, and bigotry. We reject your support for torture, your calls for murdering civilians, and your general encouragement of violence. We reject your denigration of women, Muslims, Mexicans, and millions of others who don’t look like you, talk like you, or pray to the same god as you.

Facing your fear we choose compassion. Hearing your despair we choose hope. Seeing your ignorance we choose understanding.

As citizens of the world, we stand united against your brand of division.

I’ve just joined this important global letter about Donald Trump and divisive politics. This is bigger than one country. Let’s make this our manifesto for the years to come. 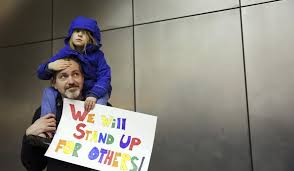 “We will not be silenced…”

This is not who we are. We don’t need to fear the unknown. Talk to your friends, speak your mind to your families, share this post on social media.